I hope you enjoy this strange but true story about an adventure I had on Monday 29 February, leap day. I sent the story in this form to my neighbours at Earthsong Eco neighborhood. www.earthsong.org.nz 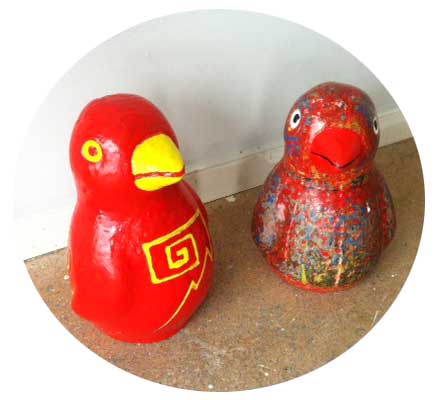 Have you seen the penguins in my garden? Some of you know that they are pottery artworks made by the Auckland artist Tony Johnston.  I have a number of his artworks in my house as well.

On Monday, I travelled out to Tony’s place with my friend, Thelma who lives at Maraetai. I drove out to her place and then we travelled in her car from there to Whakatiwai near Miranda, on the Firth of Thames – a 2 1/2 hour journey in total.  Tony put on lunch for us, a mince pie and an apple pie freshly baked.  He showed us around his studio and I bought two more penguins.    One penguin, I left with Tony to finish painting, and the other I took with me when we left about 3:30pm.

On the way back from Whakatiwai it began to rain, and although Thelma was not driving fast, about 70kms, the road was a bit wet and possibly we hit a greasy patch.  We began to skid across the road and then it is a bit blurry but it seems we hit a fence, did a 360 roll and ended up in a paddock, the right way up. The car was munted, most of the glass fell out
of the windows, the passenger door was impassable. Thelma turned off the car key, and we took a few minutes in which to absorb the situation. We checked for blood and missing limbs but found none. We managed to ease our way out of the car through the driver’s door. We then checked again to see if we were really alive and upstanding (though rather shocked),  gathered up our belongings (including my penguin) and clambered through the very long grass over what was left of the fence, and up to the road.

As I got to the road, a car pulled up. The driver wound down the window. He said, “Hello Dale, what’s up” (or words to that effect). I explained the situation, all the time clutching my penguin.  He invited us into his car and I did my best to recall who he was. We made a few connections, e.g. Co-counselling and the Wavy group. He then said, ” You
must have been out to visit Tony Johnston and got that penguin. I’ve have got 3 of those myself.”  I laughed and said “This is my 3rd penguin here”.

It was a bizarre king of “snap”.  (Tony has only made about 30 penguins so far).

This guy, Francis J, was on his way to his home at Orere Point, but kindly turned around his car and drove us to my friend’s place at Maraetai.  Once there, Thelma and I regrouped and gave ourselves several dosed of arnica. Eventually I drove back home in my still intact car, getting here about 7:15pm.

The new penguin has now joined its two mates in my garden.  Please do pop by and admire (him/her/it), now named Abaddon – the reddish one in the middle.  There is one more to come, a bright red one with yellow markings. 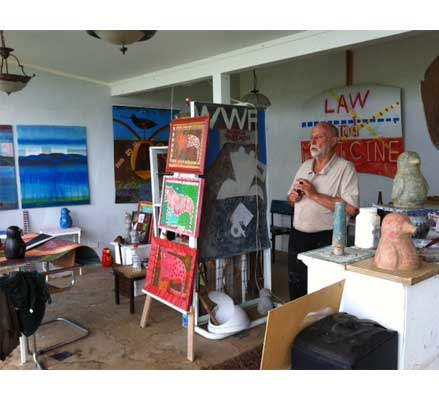